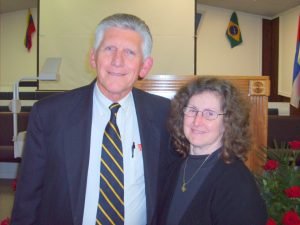 Brother Wayne and Mrs. Susie Hudson has been voted in as our Interim Pastor and Pastor’s wife of Metropolitan, as of May 2022. The Hudson’s are Metropolitan’s sponsored Evangelist.

Dr. Hudson pastored Bayou Drive Baptist Church in Alvin, TX. for 22 years before taking the pastorate of Calvary Baptist in Burkburnett, Texas for almost 3 years. He pastored only 2 churches in 25 years of service as a pastor. For approximately 3 years Brother Hudson
struggled with the call to ministry of evangelism and ministering to churches through an itinerant ministry. He finally realized that if evangelism is a call, and if he believed that it is based upon Ephesians 4:11, it was not to be put off. After finding his Scriptural walking
orders in 2 Corinthians 4:5, “For we preach not ourselves but Christ the Lord; and ourselves your servants for Christ’s sake,” he surrendered to preach Jesus and serve the local church through the office of evangelist. By faith he resigned from the church in Burkburnett and in August of 2006 and submitted himself to God and entered full time into itinerant preaching ministry. God has blessed richly in all of it. It is Metropolitan Baptist Church’s great honor to sponsor this faithful servant.

Brother Daniel  grew up in the North Side of Fort Worth, Texas. He met his wife, Michelle in June 2006 and they have 4 kids. They have been members since July 2016, at Metropolitan Baptist Church. Daniel attended Trinity Baptist Bible College in Arlington, Texas in August 2015 and graduated May 2018, where he received his Associates in Pastoral Studies. He began his journey as a Sunday School Teacher for our Intermediate class, and became Youth Director of Metropolitan Baptist Church in June 2018. He is currently attending Texas Theological Seminary & University to obtain his Bachelors Degree. His wife, Michelle, is our church secretary.